Well-loved. A go-getter. A real dynamo. A leader.

These are the words Alfredo Cardenas used to describe his daughter Alicia Cardenas, who he confirmed was among those killed in a Monday night shooting spree across Denver and Lakewood.

Alicia Cardenas was the owner of Denver’s Sol Tribe Custom Tattoo and Body Piercing — the first stop on the unidentified shooter’s rampage across the city.

A collection of flower bouquets and candles accumulated Tuesday morning outside the tattoo shop known for its inclusivity.

Alfredo Cardenas said he found out about the incident Monday night when his son informed him there had been a shooting outside Sol Tribe Custom Tattoo and Body Piercing, and he feared the worst. Police confirmed to the family that Alicia Cardenas had died in the shooting, Alfredo Cardenas said.

Alicia Cardenas was 44 years old and a loving mother to a 12-year-old, said stepmother Carol King.

“She was greatly involved in the Mezo (Mesoamerican) traditions and dances,” Alfredo Cardenas said. “She was part of the community — drummers, dancers, ceremonies. She was well loved. She was a real go-getter, a real dynamo, a leader. She kind of set the pace for upscale tattoo shops. She was respected by the tattoo community and other communities.”

Sol Tribe Custom Tattoo and Body Piercing is located near the intersection of East First Avenue and Broadway.

Cardenas described herself as a “true Denver Native” in her biography on Sol Tribe Custom Tattoo and Body Piercing’s website, adding that she was a “proud Indigenous artist born and raised in the city who’s been working in the Denver body modification industry for nearly her entire life.”

Brenda Vargas, 22, was searching for a tattoo artist who identified as Chicana or Indigenous to ink a large arm and shoulder piece of the feathered serpent Aztec deity Quetzalcoatl, which Vargas said signified divine knowledge.

Vargas found Cardenas to be a perfect match as an activist, Chicana, artist and organizer. During the tattoo session, Vargas said Cardenas talked about breaking barriers in a male-dominated industry and rising to own her own tattoo shop. 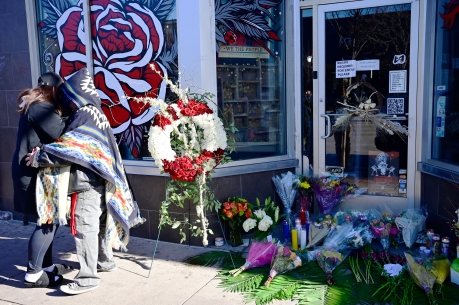 “Anyone who knows Alicia knows that she has a strong character,” Vargas said. “She’s intimidating but in the best way when you first meet her because you just know that she’s a badass and that she’s powerful. I identify as Chicana and when people ask who I look up to, I don’t ever really have an answer because people other people normally look up to — they don’t look like me. They don’t come from my community. Alicia was inspiring because she was somebody who looked like me, doing the work, inspiring youth and being an artist, and I’m an artist, too.”

Cardenas started working in the body modification industry when she was 16, opening her first tattoo shop in 1997 in Capitol Hill, Twisted Sol, the biography said. In 2009, Cardenas moved the shop to its current Broadway location and opened Sol Tribe.

Carley Carter used to stop by Sol Tribe at least once or twice a month when she was a junior and senior at Denver School of the Arts to look at the jewelry and photos of tattoos – even though she was too young to get any for herself. Carter, who did not know Alicia personally, got her ear, septum and nose pierced at the shop once she turned 18.

“I don’t even know why I was there so often,” recalled Carter. “It was such a clear safe space to be in for someone who felt a little bit different.”

When Isadora Bielsky was looking for a place for her 9-year-old daughter to get her ears pierced again after a bad experience, her search for the best piercing place in Denver led her to Cardenas’ shop. She said it was rated the best for health and safety in multiple places.

She made the appointment, and though she and her daughter had never been inside a tattoo shop before, she said everyone there, including Cardenas, made them feel so comfortable and everything was conducted professionally. She and Cardenas spoke about their daughters, cracked jokes and just had a good time.

Cardenas described herself as a mural artist and a cultural anthropologist who paints “ancient-inspired geometric murals” around the city, according to the biography.

Cardenas was active in the Babe Walls community, a group of Colorado women and non-binary mural artists. In an Instagram post by the Babe Walls group, Cardenas was described as a “mama bear” in the community who influenced those around her with her teachings and “humongous heart.”

Additionally, Cardenas taught safety classes for the body art industry, according to the biography.

Garcia said Cardenas pushed him to become involved in the professional piercer organization and described her as a “powerhouse” in the piercing and body modification industry, going so far as to start conferences in Latin America to help educate piercers about health and safety to protect her community.

“All Alicia was to me was a beacon of light,” Garcia said. “She did nothing lackluster. Her energy, love, passion came out in everything she did.”

Danny Stange, a friend of Cardenas for nearly 30 years, said the two practiced traditional Indigenous dance together and that he felt her loss. He considered her a sister, and said when he heard about her death, it felt “like part of my family is gone.”

“She was a beautiful artist,” Stange added.

Jessica Seaman covers health for The Denver Post. A native of North Carolina, Jessica joined The Post after stints as a reporter in Greensboro, North Carolina and Little Rock, Arkansas. She is a graduate of UNC-Chapel Hill.
jseaman@denverpost.com
Follow Jessica Seaman @jessicaseaman