Cañon City resident Andre Shepherd has lived a delicate truce with the Twelve Tribes ever since his ex-wife took their 3-year-old daughter and moved into the group’s Manitou Springs compound five years ago.

Shepherd knew little about the religious cult early on, but became uneasy as he learned more, particularly with the group’s teachings around race, which say that Black people are cursed to be subservient to white people.

Shepherd, who is Black, went to court in 2019 to seek full custody of his daughter, objecting to both the group’s racism and its practice of physically disciplining children. A Colorado Springs judge denied his petition, and in December, his ex-wife, who is white, took their daughter and moved to California, despite their shared custody.

While the Twelve Tribes carefully curates a harmless, idyllic public image when visited by outsiders, the group’s racist, misogynistic and homophobic teachings are well known to ex-members, who described the philosophies and other problems within the cult to The Denver Post for a series of three stories this week.

About 3,000 people are estimated to be members of the Twelve Tribes, which maintains about three dozen worldwide communities. Followers live communally and, ex-members say, work without pay at the Twelve Tribes’ assorted businesses. The cult, which began in 1972 in Tennessee, expanded to Colorado in the early 2000s and now has two communes on the Front Range, one in Boulder County and another in Manitou Springs, with an estimated 50 to 70 local members.

The Twelve Tribes drew attention earlier this year when officials confirmed they were investigating whether the Marshall fire may have started on the group’s Boulder County property, though authorities have not yet announced any conclusions about the deadly wildfire’s origin.

Twelve Tribes leaders contacted by The Post either declined to comment or briefly defended the group, which blends elements of Christianity and Judaism with its founder’s personal beliefs. Leaders did not answer a list of questions emailed to the group’s headquarters, and a local leader at Boulder’s Yellow Deli declined to let The Post visit the group’s Boulder compound.

“I appreciate you calling me, but we just don’t really have a whole lot of interest in talking to the media,” said leader and longtime member Tim Pendergrass, who lives on a Florida commune.

The group can be considered a cult because of its all-or-nothing belief system centered around a charismatic, authoritarian leader, cult expert Janja Lalich said. Cults have extremist ideologies and use coercion to control or exploit members, she said.

Generally, Twelve Tribes members do not hesitate to mislead or lie to outside, worldly authorities when challenged by police investigations or in court — a tactic that Shepherd apparently ran into when he sought custody of his daughter.

“They have no problem with lying, because everyone out here doesn’t need to know the truth,” said a member who left in his 30s and spoke to The Post on condition he not be identified to protect family still in the cult. “Whatever they need to say to keep on doing what they do is what they’re going to say.”

Shepherd’s daughter lives two different lives. When she’s with her mother in the Twelve Tribes, she wears conservative clothing, lives communally, is barred from having toys or games and is only allowed to go swimming if she swims laps followed by jumping jacks. 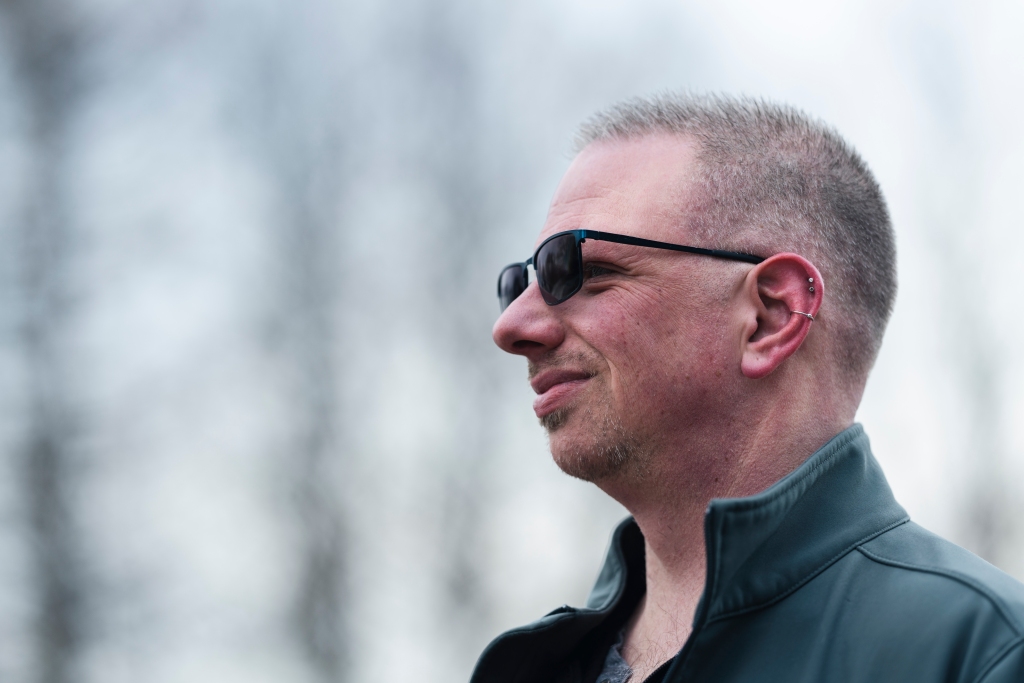 The Twelve Tribes gave Shepherd’s daughter a new name — he refuses to use it and still calls her by her birth name, which she now refers to as her “heathen name,” Shepherd said. When his daughter is with him, she wears modern clothing, watches TV, plays with toys.

“One time, I went in there (to the commune), and they have this little closet, and in a little box, she had a couple toys,” he said. His daughter led him to the secret spot. “And she said, ‘OK, we just keep this in here for me.’”

Over time he grew worried because his daughter, now 8, sometimes had unexplained marks and bruises on her body. Once, when she was 4 or 5 years old, she arrived for his parenting time with a particularly nasty scratch on her torso — nothing that needed stitches, but enough to leave a scar — and told him she’d been hurt climbing down a ladder from a roof.

But it was when his daughter said she was “Cham” and had “Cham family” that Shepherd sat down and researched the Twelve Tribes’ teachings on race.

The cult believes Black people are cursed to be slaves, according to a 2005 teaching obtained by The Post. The teaching comes out of a Biblical story involving Noah and his three sons. Under the Tribes’ interpretation, each son represents a race: one son is white, another Asian, and one, named Cham, is Black. In the story, Noah gets drunk and passes out naked in his tent. Cham sees his naked father and tells his brothers. They react by walking backward into the tent to cover Noah’s nakedness. Noah then wakes and curses Cham for mocking him, and says he and his descendants must be slaves to his white brother.

The Tribes teaches that any poverty, unrest or problems affecting Black people today are because Black people are not subservient to white people and are living against God’s natural order. Only by joining the Twelve Tribes can Black people be freed from the curse, the cult asserts in its teachings.

“The more men try to set Cham free, he gets worse and worse in his own soul… Slavery is the only way for some people to be useful in society,” a 1988 Twelve Tribes teaching reads. “They wouldn’t do anything productive without being forced to.”

Once, as they talked about their daughter misbehaving, Shepherd’s ex-wife said, “‘Oh, we just say that’s the Cham in her,’” Shepherd recalled.

In court, when he objected to the racism, and to his daughter being called a “Chamite,” or a descendant of Cham, Shepherd’s ex-wife testified that the teaching was about “one of Noah’s sons who went to Africa,” according to court documents.

That’s not what the teaching is about, former members said. But Twelve Tribes’ members do not hesitate to lie to authorities to protect themselves, ex-members said. It’s a practice based on the Biblical account of Rahab, who in the Bible story hides two Israelite spies and lies to authorities about it, which the Tribes sees as a righteous act.

“The Court does not find any credible evidence that the community is racist, but out of respect for Father asks Mother not to have anyone in the community describe (the daughter) as a ‘hamite’ (sic) or to use that description because it is offensive,” she wrote in an order. “The Court finds… this community has cross-cultural values and acceptance of people from all different cultures, ethnicities and races.”

The judge also approved disciplining Shepherd’s daughter with a wooden rod, with the instruction that only the girl’s mother could hit her. A child welfare investigator assigned to the case visited the Twelve Tribes and found no problems, court records show.

“The children appear to be healthy, happy, well-socialized and musically inclined,” the order reads.

Shepherd received 50/50 parenting time, though his daughter was in her mother’s care for a significant number of religious holidays and weeks-long religious festivals, which made the split less even, he said.

His daughter has adjusted well to living in both worlds, Shepherd said. He hasn’t seen as many marks on her since the revised court order, and her early talk about sinners burning in lakes of fire has turned more toward spreading the good word. Shepherd is careful how he talks about the Twelve Tribes around his daughter, not wanting to disparage the life she’s in.

The split parenting time worked until the end of December, when Shepherd’s ex-wife took their daughter to a Twelve Tribes community in California. Leadership at the Twelve Tribes routinely moves members around from community to community, ex-members said, in part to keep people from becoming too comfortable or connected to a particular place. Separating families is also a common tactic.

Shepherd’s ex-wife originally proposed the idea as a temporary trip, maybe a week or two, but now says they’ll be staying in California permanently, despite Shepherd’s weekly visitation rights.

He’s having trouble getting in touch with his ex-wife and daughter through the California community’s one shared phone, Shepherd said. The line will ring and ring, then say the voicemail is full. So he’s preparing for a renewed custody fight, trying to scrounge up another $5,000 to pay for a lawyer’s retainer. He’s looking into fundraising for an attorney or finding free legal help.

Shepherd said his ex-wife told him she was moving because of “the community’s needs.”

“That doesn’t come before my daughter,” he said.

While every member of the Twelve Tribes is required to conform to the cult’s rules and subject to the edicts of leadership, women are particularly powerless in the highly patriarchal society, ex-members said.

Alina Anderson, an ex-member born into the cult who left in 2001 when she was 14, remembered walking in on her father kicking her mother as she lay on the floor in the fetal position when Anderson was 10 or 11.

Anderson is identified by her middle and formerly married last names to avoid being recognized by current Twelve Tribes’ members. Women have little autonomy or authority in the highly-patriarchal cult, and are expected to submit to men, according to their teachings.

“They believe women’s rightful place is in absolute submission to men,” the member who left in his 30s said. “…The girls raised there have been raised from birth to believe this. They have no-self worth, they have no value, except in reference to men.”

Marriages are carefully curated and allowed only with the approval of leaders; divorce is almost never allowed, unless one spouse leaves the group. Single people in the Twelve Tribes usually share bedrooms, but married couples are given a private bedroom — a major perk.

Interracial marriages are strongly discouraged, and homosexuality is considered a sin worthy of death, according to a teaching reviewed by The Post.

“They must be put to death,” the 1990 teaching reads. “Homosexuality is a capital offense. They did what was detestable, and they became detestable.”

In the past, children or teenagers suspected of being gay were interrogated and punished in inquisitions, ex-members said.

John I. Post, who grew up in the Twelve Tribes, came out as gay after he fled the group and went to college, once he’d started to undo what he described as “brainwashing” about homosexuality.

“(My dad) told me that I was going to hell for being gay,” he said. His mother supported him, he said, even though she is still in the group.

Post hopes to see the Twelve Tribes end, though he and other first-generation children worry about what might happen to their parents if it dissolved. After decades in the cult, they’d be kicked to the curb with no retirement funds, no insurance, no homes.

“I told my family we need to be prepared to support our parents,” Post said. “…I read a book about different cults — the average length is about 20 years and it falls apart. Now the Twelve Tribes, they’re still alive, barely. They will fall apart. They will.”

Shelly Bradbury is a breaking news reporter who joined The Denver Post in November 2019. She previously worked as a crime reporter at the Pittsburgh Post-Gazette in Pennsylvania and the Chattanooga Times Free Press in Tennessee. She's been a reporter since 2012, focused on criminal justice, breaking news and enterprise. In Pittsburgh, she helped the newspaper earn the 2019 Pulitzer Prize for breaking news after a mass shooting at a local synagogue.
sbradbury@denverpost.com
Follow Shelly Bradbury @shellybradbury